There is no doubt that the development of technology has and will continue to change our lives profoundly. In the era of information overload, we are not looking for information, but the information is surrounding or even drowning us. Writing robots, algorithm recommendations, robot anchors, these seemingly “futuristic technology” concepts have appeared more and more frequent in people’s field of vision in recent years. It can be said that this is the best era for the development of the media industry and also the worst age. This will continue to affect journalism as the external environment continues to change. However, media workers are starting to get nervous, and the students who want to work in the newsroom are confused about their future.

The question “Is the robot used to help news editors or to replace them” has become a topic of public discussion in the news industry in recent times. This is a severe problem because it is related to the comprehensiveness and quality of the news spread to the public. The quality and authenticity of the report are essential to the people because we don’t want the government or media companies to publish some meaningless news to waste our time, even publish fake news to deceive the people. I intend to study the authoritative media in different countries and some public media people’s view of the writing robots. Then, I will combine the information I find and ordinary people think about whether writing robots will replace human editing problems to speculate on two things that will happen in the future:

My initial thought was to imagine the new future of the news broadcaster. Because in November last year, China’s Xinhua News Agency released the world’s first synthetic news anchor. This incident has aroused my interest. However, through research, it is found that there is very little information related to the background of AI broadcasters and the future development of news broadcasters. At that time, the three peers also gave me useful suggestions. They hoped that I should not pay attention to the single aspect of the development of the news industry. One of my classmates plans to study the future development of the magazine industry (she might change the topic now), she said that research on this aspect is also a study of the job opportunities of our professional students in the future. Her initial concept inspired me because it was essential to study the issues related to the future work of our professional students. And I had a three-month editor intern experience at the Xinhua News Agency in China. I had a day-to-day work as a formal editor, so I have a deep understanding of what editors should do in the newsroom and the importance of editing this profession then I changed the direction of the research.

If you are interested in any of my previous sections, here is the link:

The Associated Press is one of the early media companies that use robotic reporters. In 2014, the Associated Press teamed up with the founders of Wordsmith to publish quarterly financial mechanization. Before the quarterly earnings report with Artificial Intelligence, manual reports can only generate hundreds of copies per month, and thousands of stories need to be completed. According to Australasian Policing (2018), Lisa Gibbs (Director of News Partnerships of The Associated Press) describes the role of AI in the newsroom. She said that AI is mainly used to organize mechanized content such as income reports and sports scores and to help organizations expand the number of stories. Besides, artificial intelligence can help journalists convert their original news content into a variety of different forms, for example, printing, online networks, social media, etc. This kind of help will allow reporters to save more time to report relevant news. Compared with the United States, Chinese media used machines to write news articles late. In September 2015, Tencent Finance launched the first automated news writing robot and published a report entitled “August CPI rose 2.0% year-on-year, hitting a 12-month high” (Geng 2018). Liu Kang, the chief editor of Tencent Finance and the project manager of Dreamwriter, said that the current writing robot is still stuck in writing articles based on algorithms rather than writing articles based on the literary background (Xinhua News Agency 2016). Take Dreamwriter as an example. Its writing method is not a simple data capture. It is based on a big data analysis platform. It selects news points, crawls relevant materials in a short time, and works according to specific news genres. The advantage of robots is that they can fully capture data, which is better than editors and reporters in terms of accuracy and timeliness.

Through my research on writing robots, it has been found that the concept of automatically generating articles by algorithms has existed for a long time. But with the further development of technology, writing robots have become popular in recent years. Besides, my guess about the event of writing robots in the short term is that more and more paper companies, newsrooms and online media companies will invent or purchase writing robots or algorithmic systems. So that can automatically generate text to increase the speed and number of reports. The more articles written by the algorithm will be used in the future. For existing robots and intelligent algorithms, there will be further improvement within 5 to 10 years. It is possible that scientists will put more effort into researching the writing techniques of writing robots to make the articles look more creative.

I interviewed eight friends around me about how to think about the relationship between writing robots and human editors, and only one of them had negative opinions. 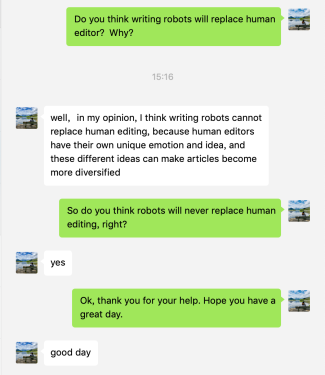 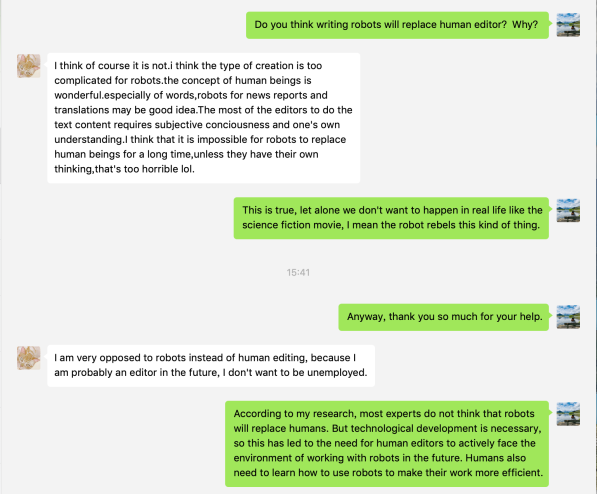 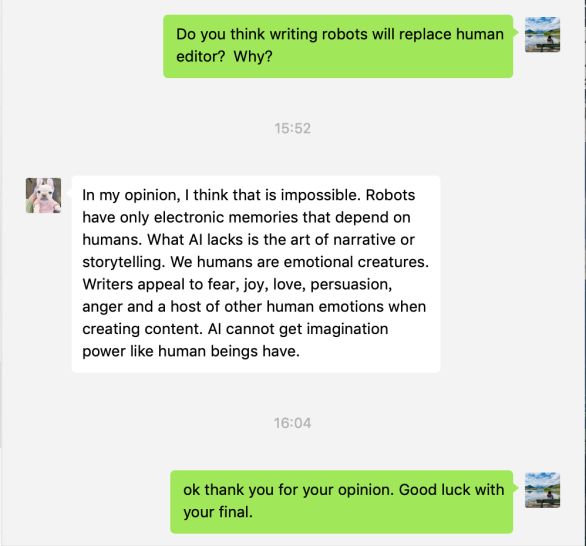 Most participants believe that human beings have emotional, unique critical thinking that can create various articles. Because robots lack this skill, human editing is not replaced by writing robots. But robots will replace those who work mechanized. As Gibbs answered the trends in the future news industry, she said: “We don’t believe that robots can replace human journalists. Let journalists do what they are good at, and let the machines do what they are good at.” Because Gibbs believes that journalism is creative, writing news reports requires critical thinking and subjective and objective judgment. That’s why robots are needed to help people do some mechanized work so that human reporters have more time and energy to do more challenging things (Peiser 2019). Liu Kang, project manager at Dreamwriter, said that the original intention of developing a writing robot was to help human editors conduct a lot of data review and help human editors do some monotonous things. Because data review is neither technical nor written, it takes a lot of time for editors to draft the manuscript with data, and even written articles contain incorrect data. But now the work can be done by the robot. Human editors can put more effort into more advanced action.

This participant believes that shortly, human editors will be replaced by writing robots just as artificial intelligence has now learned to copy “starry nights” in Van Gogh’s style. But his idea is based on the fact that artificial intelligence has evolved to a “top” like the robots that appear in science fiction movies already have their opinions. I think this is impossible because painting and writing are two completely different concepts. The first step in learning to draw is to copy the original painting, but learning to write is not. Although writing begins with learning of words and phrases, and through a large number of articles written by celebrities to citation and “imitation,” this “imitation” is not to say 100% copy, but to “imitation” of celebrity writing style. Add your style and emotions based on it. That’s why I don’t agree with this participant’s point of view. According to an article written by Miroshnichenko, he thinks that robots will replace journalists. He believes that the newsroom must produce as much content as possible to increase fan reading, views, click-through rates, and more. Instead of letting reporters spend a long time to write good news to attract thousands of readers, it’s better to let the robot write the thousand news stories in the same period to attract readers, even if there are only one hundred readers per article (Andrey, pp. 17-18, 2018). Miroshnichenko believes that the quantity of news is more important than the quality of the story. So he thinks robots will replace journalists.

In general, writing robots will have an impact on the news industry, but more is to use the technical auxiliary functions. The media must rely on the power of science and technology, but it cannot be a slave to science and technology. Data is only valuable for human use. In the future, every vertical field will be accompanied by superintelligence. Human-machine collaboration is an inevitable trend of social development. Behind every news report in the future, there may be a human reporter and a robotic reporter who are standing around the world from different angles to write the same manuscript. As Marc Zionts, CEO of Automated Insights, said that there is still a bloody long way to go before robots can replace humans editors who have creative thoughts and flesh-and-blood (Peiser 2019).”

‘Artificial Intelligence can check the spread of fake news but can never replace human journalists’ (2018) Australasian Policing, Vol. 10, No. 2, p. 53